I just finished an encaustic piece to donate to the Bisbee Women's Club Chair Auction this weekend. The piece is called "Ceci n'est pas une chaise", or "This is not a chair".

So here's the finished 8x10 piece - my one and only created this month. It was hard to get back in the studio after completing the "Mirror Mirror" series. Now after a little breather, it's time for more encaustic studio AND photography!!! 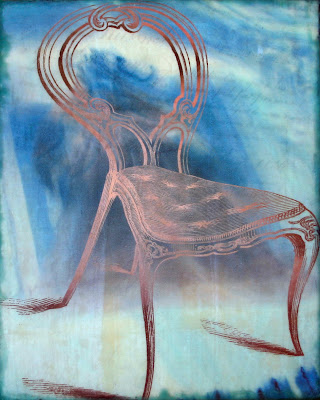 As you can see the chair has a bit of motion to it ala Dali, "Still Life, Fast Moving".
Side View 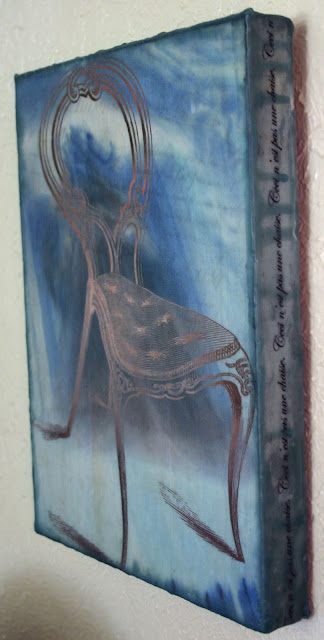 After going round and round with the fact thatthis  is NOT a chair that I'm donating to the chair auction, I finally came up with the text and title, "Ceci n'est pas un chaise.", of course inspired by none other than:
From Wikipedia:
Magritte's work frequently displays a juxtaposition of ordinary objects in an unusual context, giving new meanings to familiar things. The representational use of objects as other than what they seem is typified in his painting, The Treachery of Images (La trahison des images), which shows a pipe that looks as though it is a model for a tobacco store advertisement. Magritte painted below the pipe "Ceci n'est pas une pipe" ("This is not a pipe"), which seems a contradiction, but is actually true: the painting is not a pipe, it is an image of a pipe. It does not "satisfy emotionally"—when Magritte once was asked about this image, he replied that of course it was not a pipe, just try to fill it with tobacco.

Of course my image is not a chair, just try to sit in it. Hope somebody likes it at the auction though.

Posted by Liz Hampton-Derivan Studio at 11:35 AM

Liz Hampton-Derivan Studio
Bisbee, AZ, United States
I have been a photographer pretty much since 1979, when I received my first 35mm camera for Christmas from my father. Last year I began working in encaustic and mixed media,experimenting with photography, computer manipulated imagery, and encaustic. I love the contemporary photo-technology and the hands-on working with the seductive wax medium, which dates back to Greco-Roman Egypt, 1st century BC. The idea of this blog is to record, and hopefully be inspired and progress, in my new art adventures. www.lizhampton.com hamptonderivanstudio@gmail.com

Artist Blogs That Inspire Me

Family, & Other Blogs I Love